May and June's Goings On

Not only was June a good month for my bar (see previous post), it was good for a multitude of other reasons as well. May had quite a few good memories as well! Here's a rundown of some of the major points:

1) Boston Trip: The trip up to Boston was wonderful. I was able to interview 16 different fund managers to get some insight into their funds and the markets, which gave me some great talking points. After the conference, I met up with Scuto and RJordan from the Wormwood Society and Fee Verte so we could head to 'Drink' for a few cocktails.

The bar was fantastic, with great atmosphere, fantastic mixologists, and unbelievable drinks. We had one cocktail newb, and one non-drinker in the party (I was neither), so it was a interesting group for a cocktail bar. We were lucky enough to pair up with Misty Kalkofen, mixologist extraordinaire and founder of LUPEC Boston, who got right down to asking us what types of drinks we liked, then began her art of drink construction from there. Over the course of the next few hours, she made for me multiple cocktails with Rye and Absinthe as a base, and branching out into Chartreuse amongst other things. Of those I took note, I had a Diamond Back, a Sazerac, a Vieux Carre and a Lawhill. We also got to sample some of their tasty Hibiscus Punch. Scuto got some of those, but other goodies as well. I was happy to see how his experience totally blew away his expectations! I think we've got a convert.

I highly recommend you seek out Drink and Misty if you're ever in Boston.


2) The long awaited Absinthe article I'd been working on for Mutineer Magazine was published last week! I pulled Gwydion Stone from Marteau Absinthe and the WS as well as Ted Breaux of the Jade and Lucid brands to help put together a kind of Absinthe 101. Lots of history and information, but high level enough that it could hold anyone's attention. It's a fantastic magazine anyway, so I suggest EVERYONE buys a subscription. It's so cheap, and it's totally worth it. 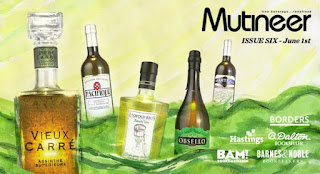 3) Monteleone Cocktail Competition - For the 60th Anniversary of the Carousel Bar in the Hotel Monteleone, the hotel, in conjunction with the organizers of the Tales of the Cocktail, held a contest to create the new Monteleone Cocktail. Entries came in from around the world, from some of the best mixologists. The entries were pared down to 5 finalists based on ingredients, ease of preparation, taste and relation to New Orleands. Those 5 cocktails were judged by the finalists of last year's Top Chef competition.

According to the organizers, my cocktail was the overwhelming favorite! So now my cocktail will be a feature on the cocktail menu at the Carousel Bar and I'll also get a 4 night stay for free at the hotel during the TotC! Here's a picture of the Top Chef crowd with my cocktail and following that is the recipe: 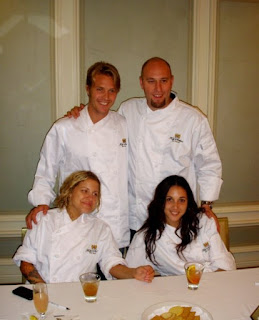 Shake ingredients and strain into a julep cup or cocktail glass with crushed ice. Garnish with orange slice.

4) Lastly the Wormwood Society is now on Twitter and also on Facebook. We will be doing Top Ten lists and plenty of other cool information about absinthe each week. Make sure to follow us!
Posted by Brian Robinson at 5:40 PM