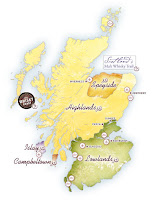 I had been discussing Scotch with a client of mine when he mentioned that he had a Scotch club that meets once a month or so to review a few. I offered to do a tasting out of my personal stash, which was well received.

After going over a few options as to what to present, we decided on a rundown of the Whisky producing regions of Scotland. Since the Highlands area has such a wide diversity of flavors, I chose to include two separate offerings from that region.

We went over some of the basics of Scotch, including how it's produced, the laws surrounding Whisky production in Scotland, and also what influences the flavor of the final product. Then we got into the drink!

From lightest to heaviest:

Central Highlands: Edradour 10 y.o.
Nose: creamy and nutty with a light sweetness
Flavor: Sweet with almonds with a gentle hint of smoke. Dry on the finish

Islay: Lagavulin 16 y.o.
Nose: cognac and chocolate with a touch of clover
Flavor: heavy and oily. Starts sweet and finishes very smoky.
Notes: Water brings out a bit of plastic in both the aroma and flavor

Overall, the tasting went wonderfully. The crowd favorite for the evening was the Glen Garioch.
Posted by Brian Robinson at 1:44 PM